The Progressive Wage Credit Scheme (PWCS) was introduced in Budget 2022 to provide transitional wage support for employers to:

The Government will co-fund wage increases of eligible resident employees from 2022 to 2026. Employers do not need to apply for the PWCS and can expect to receive the payout for 2022 by the first quarter of 2023.

As announced on 21 Jun 2022, the PWCS for 2022 will be enhanced by increasing Government’s co-funding share from 50% to 75% for the first tier and from 30% to 45% for the second tier, while maintaining all other parameters.

The PWCS will have the following design:

a) Singapore Citizen and Permanent Resident employees are eligible.

d) Average gross monthly wage increase must be at least $100 in each qualifying year to be eligible for PWCS.

Is my firm eligible?

Your firm will automatically qualify if you give wage increases to resident1 employees who:

Wages paid to business owners i.e. sole proprietors of sole proprietorships, or partners of a partnership, or both a shareholder and director of a company, will not be eligible for PWCS.

For each qualifying year, the Progressive Wage Credit for each eligible employee will be computed as follows:

For the purposes of the PWCS,

Qualifying Wage Increase refers to the amount of wage increase given to an employee that qualifies for co-funding in any qualifying year. It consists of two components:

Example 1: Employee who earns $1,800 per month in 2021, and experiences average gross monthly wage increase of $100 in January of each year

Amount of PWCS Payout received in total for this employee: $3,900

[1] As PWCS is effective from 2022, wage increases in 2021 (i.e. increases in 2021 from the 2020 wage) will not be supported by PWCS.
[2] Calculation of total PWCS payout for the year assumes that employer makes 12 months of CPF contributions for each qualifying year. 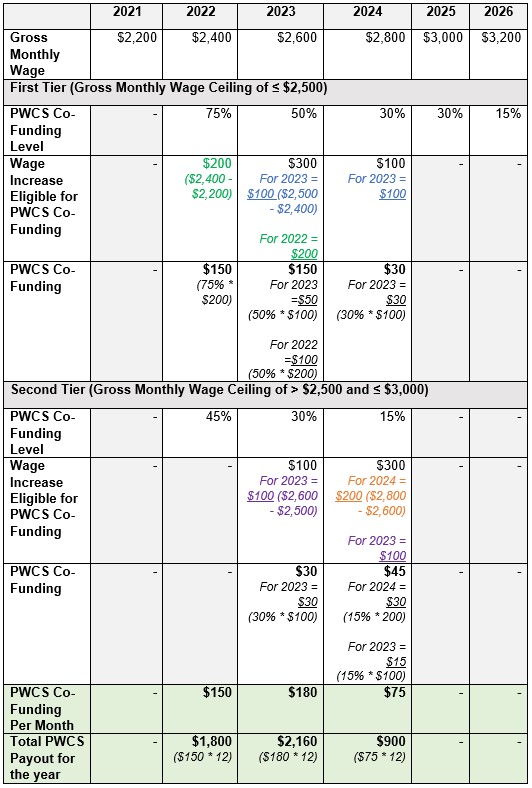 Amount of PWCS Payout received in total for this employee: $4,860

Note:
[1] As PWCS is effective from 2022, wage increases in 2021 (i.e. increases in 2021 from the 2020 wage) will not be supported by PWCS.
[2] Calculation of total PWCS payout for the year assumes that employer makes 12 months of CPF contributions for each qualifying year.

PWCS will not co-fund the wage increases of this employee, as the employee is earning above the wage ceiling of $3,000.

Employers do not need to apply for the payouts. For each qualifying year, IRAS will notify eligible employers of the PWCS payout payable to them and disburse the payout by Q1 of the subsequent year. The first payout period for PWCS will be in Q1 2023.

How do employers receive the payout

Payouts will automatically be credited to employers' GIRO bank account for Income Tax/GST. For those without GIRO accounts, the payout will be credited to their bank account that is registered with PayNow Corporate1. Employers who are not already on these direct crediting modes will have to sign up for these modes to receive their payouts.

If there are queries that have not been addressed on this site, please send us an enquiry via go.gov.sg/askpwcs. You can also call us at 6351 3390 between 8 am and 5 pm from Monday to Friday.

A. General Questions on the Scheme

1. What is the Progressive Wage Credit Scheme (PWCS) and its objectives?

The PWCS is intended to provide transitional support to employers to:

2. Who will qualify for the Progressive Wage Credit Scheme?

Employers will automatically qualify if they are not on the employer exclusion list and wage increases are given to resident employees who:

1.    Received CPF contributions from a single employer for at least 3 calendar months* in the preceding year,

3.    Have an average gross monthly wage increase of at least $100 in the qualifying year, and

4.    Have wages below the stipulated wage ceilings for PWCS First Tier or Second Tier

* The 3 calendar months of CPF contributions in the year need not be consecutive.

The PWCS is a separate scheme from the WCS. The WCS was a transitional scheme intended to support business embarking on transformation efforts and encourage sharing of productivity gains with workers. The PWCS is intended to provide transitional support to employers to:

a.    Adjust to upcoming mandatory wage increases for lower-wage workers covered by the Progressive Wage and Local Qualifying Salary requirements; and

b.    Voluntarily raise wages of other lower-wage workers.

The WCS will cease after the last payout for 2021 qualifying wage increases in March 2022.

4. How does the Government verify the wages that I pay my employees?

5. Besides supporting employer in complying with the mandatory Progressive Wages and Local Qualifying Salary, why does the PWCS support voluntary wage increases as well?

The PWCS is intended to provide transitional support to employers to:

a.    Adjust to upcoming mandatory wage increases for lower-wage workers covered by the Progressive Wage and Local Qualifying Salary requirements; and

b.    Voluntarily raise wages of other lower-wage workers.

This will help us to uplift all lower-wage workers, regardless of whether they are covered by Progressive Wages. Hence, the PWCS also supports voluntary wage increases.

6. Why does the PWCS have a second tier?

While the PWCS is intended to support wage increases for lower-wage workers, we recognise that firms may need to adjust the wages of other workers earning just above lower-wage workers. Furthermore, economic conditions remain uncertain in the near term. Hence, additional support will be provided over three years for wage increases given to workers earning between $2,500 and $3,000.

7. Why is the minimum average gross monthly wage increase eligible for PWCS support set at $100?

8. Why is the co-funding level reduced from 2024 onwards?

PWCS is a transitional scheme. More support is provided in the first two years (2022-23) to help employers adjust in the short-term. Employers should use the duration of support to accelerate the structural transformation of their business processes and improve firm-level productivity. This would be critical in ensuring that the wage increases remain sustainable in the long term.

2. If my employeeʼs gross monthly wage was reduced in 2021 but subsequently increased in 2022, would the increase by eligible for PWCS support in qualifying year 2022?

Yes, the increase in the gross monthly wage from 2021 to 2022 would be eligible for PWCS support as along as the increase was at least $100 and all other eligibility criteria are met.

3. If my employee worked for me for four months in 2022, how is his gross monthly wage and the PWCS payout computed?

The PWCS payout will be computed based on multiplying the co-funding level by the qualifying wage increase and the 4 months (see Computation of Progressive Wage Credit for details).

4. My employee joined the company in Nov 2021 but left in Feb 2022, and received a wage increase of more than $100 from Jan 2022. As he had been employed by the company for a total of four months, will the wage increase be eligible for PWCS support in qualifying year 2022?

No, the wage increase will not be eligible for PWCS support in qualifying year as the employee was employed by the company for less than 3 months in the qualifying year i.e. 2022 in this case (and would therefore have not received 3 months of CPF contributions from the company).

No. The PWCS Second Tier support is intended to provide additional temporary support to employers, in the consideration that economic conditions remain uncertain in the immediate term. As the Second Tier of PWCS support will end in 2024, the sustained wage increase in 2025 will not be co-funded by the PWCS.

8. I received PWCS First Tier support in qualifying year 2026 due to a wage increase given to my employee in 2026. If this wage increase is sustained in 2027, would I receive PWCS support for year 2027 too?

The highest of the employee's previous average gross monthly wages, which in this case is $2,100 under employer B, will be used to compute the PWCS support.

1. Are part time and contract workers covered by the Scheme?

Yes, all part-time, hourly rated, contract and full-time employees can be eligible for the Scheme, as long as they are paid CPF contributions by their employer and all other eligibility criteria are met.

2. Will employers qualify for the Progressive Wage Credit for new hires?

This wage increase will be computed automatically based on the employee's CPF contribution records, and Wage Credit will be paid out to you if all conditions of the Scheme are met.

3. Will employers qualify for the Progressive Wage Credit for new entrants into the workforce?

The PWCS is purposed to support wage increases of lower-wage workers. As new entrants into the workforce do not have an existing wage (i.e. they have not received CPF contributions from a single employer for at least 3 calendar months in the preceding year), they are considered not to have received a wage increase. The wage paid by employers to these new entrants will therefore not qualify for PWCS.

Yes, even though the employee was working in another firm in the preceding year, the employee’s wage increase in the current qualifying year would qualify for PWCS as long as all other eligibility criteria are met.

The qualifying wage increase will be computed with reference to the employee’s gross monthly wage for the preceding year, which would have been earned at the previous firm.

5. Why are wage increases given to Permanent Residents eligible for PWCS?

The mandatory Progressive Wage and Local Qualifying Salary requirements are applicable to all local workers, including permanent residents. The PWCS will help employers adjust to these mandatory requirements.

The Progressive Wage Credit is a government grant that co-funds wage increases. Hence, it is considered a revenue that is taxable in the hands of the employers. The payouts will be taxed in the relevant Year of Assessment corresponding to the year you received the payouts.

Individuals (including sole proprietors) and partnerships are not required to declare the Wage Credit payout received in their income tax returns (Form B/B1 or Form P) as this will be automatically included by IRAS in their tax assessments for the relevant YA.

Companies are however, required to declare the Wage Credit payout received in their income tax return (Form C/Form C-S) for the relevant YA.